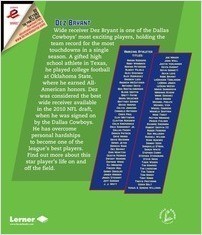 Wide receiver Dez Bryant is one of the Dallas Cowboys’ most exciting players, holding the team record for the most touchdowns in a single season. A gifted high school athlete in Texas, he played college football at Oklahoma State, where he earned All-American honors. Dez was considered the best wide receiver available in the 2010 NFL draft, when he was signed on by the Dallas Cowboys. He has overcome personal hardships to become one of the league’s best players. Find out more about this star player’s life on and off the field.