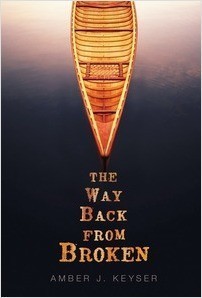 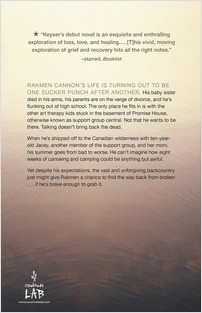 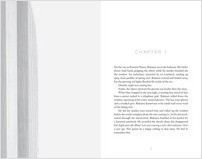 The Way Back from Broken

Rakmen Cannon’s life is turning out to be one sucker punch after another. His baby sister died in his arms, his parents are on the verge of divorce, and he’s flunking out of high school. The only place he fits in is with the other art therapy kids stuck in the basement of Promise House, otherwise known as support group central. Not that he wants to be there. Talking doesn’t bring back the dead.

When he’s shipped off to the Canadian wilderness with ten-year-old Jacey, another member of the support group, and her mom, his summer goes from bad to worse. He can’t imagine how eight weeks of canoeing and camping could be anything but awful.

Yet despite his expectations, the vast and unforgiving backcountry just might give Rakmen a chance to find the way back from broken . . . if he’s brave enough to grab it.

Amber J. Keyser’s debut novel is a wrenching and brutally honest story of adversity and hope.

“This book is a heartbreaker, but any reader can benefit from its message of honesty, resilience, and courage.”—VOYA

“With a cast of diverse well-rounded characters, poignant relationships that never become schmaltzy, and a compelling high-stakes adventure, this vivid, moving exploration of grief and recovery hits all the right notes.”—starred, Booklist

“Rare in its honesty. . . . A subtly touching tale of liberation from grief that, with its sincere existential questioning, will stay with readers.”—School Library Journal

“A quiet and memorable story of how paddling in the wilderness forces two unlikely friends to face their grief and embrace their power.”―Kirkus Reviews

“An impressive debut novel that takes readers on a journey rich in emotion and adventure.”―E. M. Kokie, author of Personal Effects

“The Way Back from Broken is compelling and unrelenting—a story for anyone trying to find their own way back.” —Sara Ryan, author of Bad Houses and The Rules for Hearts