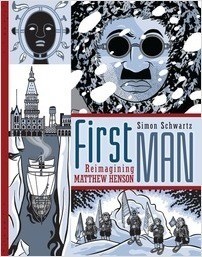 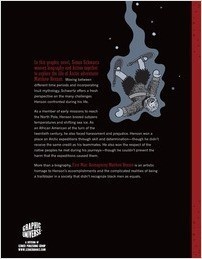 In this graphic novel, Simon Schwartz weaves biography and fiction together to explore the life of Arctic adventurer Matthew Henson. Moving between different time periods and incorporating Inuit mythology, Schwartz offers a fresh perspective on the many challenges Henson confronted during his life.

As a member of early missions to reach the North Pole, Henson braved subzero temperatures and shifting sea ice. As an African American at the turn of the twentieth century, he also faced harassment and prejudice. Henson won a place on Arctic expeditions through skill and determination—though he didn’t receive the same credit as his teammates. He also won the respect of the native peoples he met during his journeys—though he couldn’t prevent the harm that the expeditions caused them.

More than a biography, First Man: Reimagining Matthew Henson is an artistic homage to Henson’s accomplishments and the complicated realities of being a trailblazer in a society that didn’t recognize black men as equals.

“[A]n unforgettable title that will resonate with readers. . . . A compelling graphic novel that biography lovers will greatly enjoy, and a wonderful addition to Black History Month book lists.”—School Library Journal

“[A] sympathetic glimpse into the hardships and prejudice faced by Henson both on and off the polar ice. . . . [T]he highly stylized imagery, some of which is borrowed from Inuit art, adds a supernatural element, escalating the menace of the polar landscape.”—Booklist

“A welcome profile of a little-known African-American explorer.”—Kirkus Reviews

“As a work of fiction rooted in injustices suffered by African-Americans and indigenous peoples alike, it’s powerful and almost unbearably sad.”—Publishers Weekly

Simon Schwartz grew up in Berlin, Germany. He is a freelance illustrator and illustration professor in Hamburg, Germany.