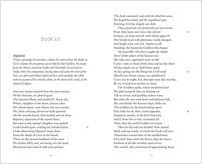 Odysseus, the hero of the Trojan War, longs to return home to his kingdom in Ithaca, where a horde of suitors (who believe the long-absent Odysseus to be dead) are courting his beloved wife. Odysseus had angered the sea god, Poseidon, and for the past ten years, he’s been beset by a host of challenges. The Greek hero must rely on wit, strength, and the aid of the gods of Mount Olympus to survive tumultuous storms, battles with great beasts, and the seductive powers of witches, sirens, and nymphs as he makes his way homeward. Originally written around 700 BCE, the authorship of this epic poem remains uncertain, but most scholars ascribe it to a blind Greek poet named Homer. This unabridged translation by William Cowper was originally published in 1791.