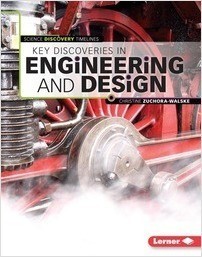 Key Discoveries in Engineering and Design

From the Series Science Discovery Timelines

Who were some of the earliest scientific engineers and what problems did they solve? What scientific discoveries led up to major breakthroughs such as the assembly line, computers, or the Internet? Who first proposed ideas to solve problems? And how did the solutions change over time? Readers will trace the history of key discoveries in engineering and design as they investigate timelines and gather key details from the text. In doing so, students will make connections between the work of various scientists and analyze the long-term effects of their discoveries.

Christine Zuchora-Walske grew up—and eventually settled down—in Minneapolis. But as a young adult, she spent some time gallivanting elsewhere, including the University of Notre Dame, London, the University of Denver, and a small town in the cornfields of Illinois. Along the way she discovered a love for reading, writing, and inquiry—and a desire to make a career of those activities. For almost twenty years now, Christine has been writing and editing books and magazine articles for children and their parents. She began as an editor with the Cricket family of children's magazines. She ventured to the Lerner Group next, and then Meadowbrook Press. After having two children, she became a freelance editor and writer. Christine's author credits are many and varied. They include crafts and puzzles; a monthly column in which she impersonated a praying mantis; natural science titles for beginning readers; books exploring countries around the world; a debate on the pros and cons of Internet censorship; and books on pregnancy and parenting. Christine has also edited hundreds of articles and books in many genres and for all ages. Christine is especially fond of science and history. But she loves all kinds of knowledge and literature. She never tires of learning new things, and she gets a kick out of trading knowledge with others.

Trace the history of significant scientific discoveries through a visual timeline of events and supporting text. Each chapter tells an intriguing story of how scientists build on the work of earlier thinkers, showcasing how smaller findings can lead up to major discoveries, perhaps even… View available downloads → 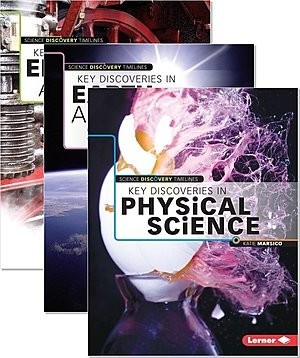