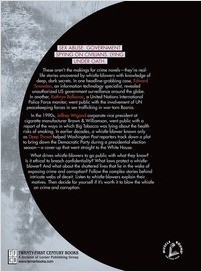 Sex abuse. Government spying on civilians. Lying under oath. These aren’t the makings for crime novels—they’re real-life stories uncovered by whistle-blowers with knowledge of deep, dark secrets. In one headline-grabbing case, Edward Snowden, an information technology specialist, revealed unauthorized US government surveillance around the globe. In another, Kathryn Bolkovac, a United Nations International Police Force monitor, went public with the involvement of UN peacekeeping forces in sex trafficking in war-torn Bosnia. In the 1990s, Jeffrey Wigand, corporate vice president at cigarette manufacturer Brown & Williamson, went public with a report of the ways in which Big Tobacco was lying about the health risks of smoking. In earlier decades, a whistle-blower known only as Deep Throat helped Washington Post reporters track down a plot to bring down the Democratic Party during a presidential election season—a cover-up that went straight to the White House.

“Attractive page design and well-chosen color photos enhance the appeal of the clearly written text….This thought-provoking volume will fill a gap in many library collections.”―Booklist

“A keen challenge to received opinions for high schoolers to chew long and hard upon.” —Kirkus Reviews

“…there are few other works that cover this topic. A useful purchase.” —School Library Journal