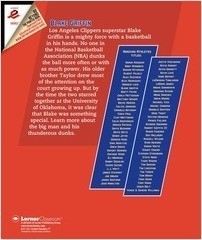 Los Angeles Clippers superstar Blake Griffin is a mighty force with a basketball in his hands. No one in the National Basketball Association (NBA) dunks the ball more often or with as much power. His older brother Taylor drew most of the attention on the court growing up. But by the time the two starred together at the University of Oklahoma, it was clear that Blake was something special. Learn more about the big man and his thunderous dunks.