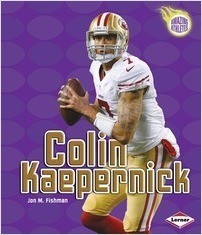 When San Francisco 49ers quarterback Colin Kaepernick was in high school, his coaches thought he was too skinny to play in college. At the University of Nevada, his coaches thought he ran with the ball too often and he would be prone to injury in the National Football League (NFL). But Colin led the 49ers to the 2013 Super Bowl. In 2014, he and his teammates were just one win away from playing in the big game again. Learn more about one of the biggest stars in the NFL.