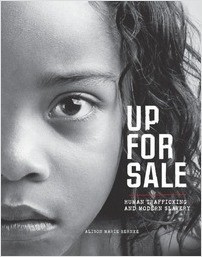 “Trafficking thrives in the shadows. And it can be easy to dismiss it as something that happens to someone else, somewhere else. But that is not the case. Trafficking is a crime that involves every nation on earth, and that includes our own.”—US secretary of state Hillary Rodham Clinton, 2009

Human trafficking is as old as slavery and continues to be practiced in the modern world. Victims of human traffickers include workers in restaurants and in garment factories, maids and nannies in the homes of wealthy families, child sex workers, beggars on the street, boy soldiers, even infants kidnapped for foreign adoptions. Women and children are more likely to be coerced or seized than men and boys, especially if they are poor and uneducated. Traffickers sell their victims for their bodies or for their labor and reap an enormous profit. Human trafficking is estimated to be a $30 to $45 billion industry on an annual basis, rivaling weapons and drug trafficking as one of the most profitable criminal undertakings in the world.

Up for Sale takes a hard look at human trafficking, identifying perpetrators and telling the stories of victims through their own words. You’ll discover why some people become vulnerable to trafficking and you’ll read about what their lives are like on a daily basis. You’ll also meet some of the courageous individuals and organizations working to free people from lives in bondage so that, in the words of US president Barack Obama, each person can “forge a life equal to [their] talents and worthy of [their] dreams.”

“An accessible style, brief chapters set off by subheadings, ample definitions, and nuanced background information regarding the economics and international scope of trafficking will help researchers understand context.” —Booklist

“The narrative is concise, clear, and factual, and there are plenty of photos and text boxes to break up text…. A strong stepping-off point for further inquiry into the subject.” —School Library Journal

“This slim volume makes clear the grinding reality of the cheapest labor and presents a welcome chance to act.” —starred, Kirkus Reviews

Alison Marie Behnke is a writer and editor. She has written about a wide range of topics, including immigration, world and cultural geography, ethnic cuisines, American and European history, biographies, and fashion. She lives in Minneapolis.