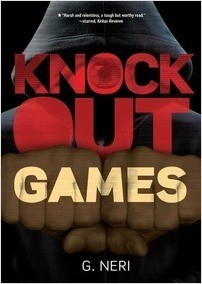 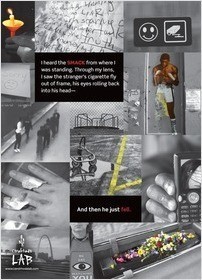 Kalvin’s crew always takes videos of their KOs, but Kalvin wants more—something better. He thinks if someone could really see the game for what it was, could appreciate it, could capture the essence of it—that would be a video for all time. The world would have to notice.

That’s where Erica comes in. She’s new in town. Awkward. Shy. White. But she’s got a good camera and a filmmaker’s eye. She could learn. Kalvin could open her eyes to the power he sees in the knockout game; he could make her see things his way. But first she’ll have to close her eyes to everything else.

For a while, Kalvin’s knockouts are strangers. For a while, Erica can ignore their suffering in the rush of creativity and Kalvin’s attention. Then comes the KO that forces her eyes open, that makes her see what’s really happening.

No one wins the knockout game.

Coretta Scott King Award honoree G. Neri captures the notorious and terrifying knockout game and its players in an unflinching novel that’s hard to read and impossible to put down.

“The writing style is as tough as the story….This well-written book will have a place in high school collections, especially urban schools. It will also play well with struggling readers.”―Library Media Connection

“This is a novel that needs to be read and discussed by both teens and adults. Get this one out there and start the discussion.” —VOYA

“[T]his is Neri’s most powerful novel to date.” —The Horn Book Magazine

“Neri (Ghetto Cowboy) skillfully portrays the moral and emotional turmoil of a teen desperate for acceptance, and the repercussions of making hard decisions. Racial and social undercurrents further give this story an intense, thought-provoking edge.” —Publishers Weekly

G. Neri is the Coretta Scott King honor-winning author of Yummy: the Last Days of a Southside Shorty and the recipient of the Lee Bennett Hopkins Promising Poet Award for his free verse novella, Chess Rumble. His novels include Surf Mules and the Horace Mann Upstander Award-winning Ghetto Cowboy. His latest books include the YA novel Knockout Games, and the picture book biography Hello, I'm Johnny Cash. His work has been honored by the Museum of Tolerance and the Simon Wiesenthal Center, Antioch University, the International Reading Association, the American Library Association, the Junior Library Guild, and the National Council for Teachers of English. Neri has been a filmmaker, animator, teacher, and digital media producer. He currently writes full-time and lives on the Gulf Coast of Florida with his wife and daughter.