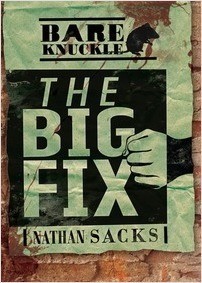 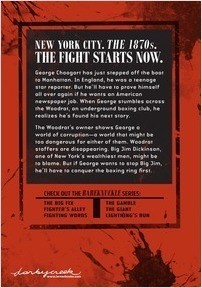 George Choogart has just stepped off the boat to Manhattan. In England, he was a teenage star reporter. But he’ll have to prove himself all over again if he wants an American newspaper job. When George stumbles across the Woodrat, an underground boxing club, he realizes he’s found his next story.

The Woodrat’s owner shows George a world of corruption—a world that might be too dangerous for either of them. Woodrat staffers are disappearing. Big Jim Dickinson, one of New York’s wealthiest men, might be to blame. But if George wants to stop Big Jim, he’ll have to conquer the boxing ring first.

“Although the series is aimed at reluctant readers, it is exciting enough to interest voracious readers as well. The Bareknuckle series would be a worthy addition to middle school libraries and libraries serving the tween population.” —VOYA

“Sacks nicely captures the chaos of the time and place and weaves a fast-paced, action-packed tale. . . . Lots of action and low page count should propel reluctant readers along.” —Kirkus Reviews