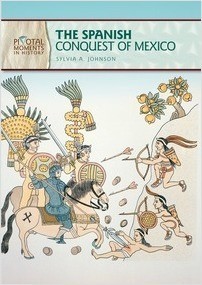 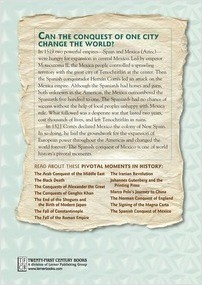 Can the conquest of one city change the world? In 1519, two powerful empires – Spain and Mexica (Aztec) – were hungry for expansion in central Mexico. Led by emperor Motecuzoma II, the Mexica people had subdued their native enemies and now controlled a sprawling territory with the great city of Tenochtitlán at the center. Then the Spanish conquistador Hernán Cortés led an attack on the Mexica empire. Although the Spaniards had horses and guns, both unknown in the Americas, the Mexica outnumbered them five hundred to one. The Spaniards had no chance of success without the help of native allies unhappy with Mexica rule. What followed was a desperate war that lasted two years, cost thousands of lives, and left Tenochtitlán in ruins. In 1521 Cortés declared Mexico a colony of New Spain. In so doing, he laid the groundwork for the expansion of European power throughout the Americas and changed the world forever. The Spanish conquest of Mexico is one of world history’s pivotal moments.