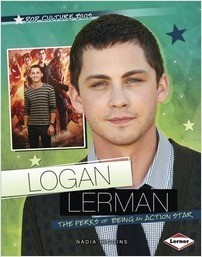 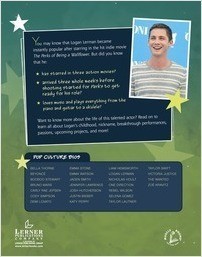 The Perks of Being an Action Star

You may know that Logan Lerman became instantly popular after starring in the hit indie movie The Perks of Being a Wallflower. But did you know that he:

• has starred in three action movies?
• arrived three whole weeks before shooting started for Perks to get ready for his role?
• loves music and plays everything from the piano and guitar to a ukulele?

Want to know more about the life of this talented actor? Read on to learn all about Logan’s childhood, nickname, breakthrough performances, passions, upcoming projects, and more!

Nadia Higgins is the author of 50-plus books for the school library market. She also worked as an editor in the industry for almost ten years. Many of her books have a science bent, though she's also written about pop stars, car art, and zombies. Nadia lives in Minneapolis with her husband and two young daughters.