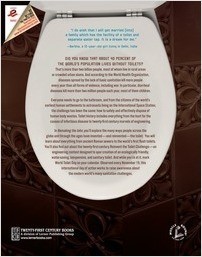 The Invention and Reinvention of the Toilet

Did you know that about 40 percent of the world’s population lives without toilets? That’s more than two billion people, most of whom live in rural areas or crowded urban slums. And according to the World Health Organization, diseases spread by the lack of basic sanitation kill more people every year than all forms of violence, including war. In particular, diarrheal diseases kill more than two million people each year, most of them children.

Everyone needs to go to the bathroom, and from the citizens of the world’s earliest human settlements to astronauts living on the International Space Station, the challenge has been the same: how to safely and effectively dispose of human body wastes. Toilet history includes everything from the hunt for the causes of infectious disease to twenty-first-century marvels of engineering.

In Remaking the John, you’ll explore the many ways people across the globe and through the ages have invented—and reinvented—the toilet. You will learn about everything from ancient Roman sewers to the world’s first flush toilets. You’ll also find out about the twenty-first-century Reinvent the Toilet Challenge—an engineering contest designed to spur creation of an ecologically friendly, water-saving, inexpensive, and sanitary toilet. And while you’re at it, mark World Toilet Day on your calendar. Observed every November 19, this international day of action works to raise awareness about the modern world’s many sanitation challenges.

“The details of sanitary progress are carefully described, with humor when appropriate. . . . [A] nicely paced, informative book which can be the basis for reports and for enjoyable browsing.”—starred, School Library Connection

“DiPiazza brings home how the history of a seemingly ubiquitous object can reveal fundamental and important truths about a society’s history and values.” —Booklist

“A good-spirited, wholly serious broaching of the—incredibly—still taboo subject of human waste, once a problem and even more so today.” —Kirkus Reviews

Did you know that about 40 percent of the world’s population lives without toilets? That’s more than two billion people, most of whom live in rural areas or crowded urban slums. And according to the World Health Organization, diseases spread by the lack of basic sanitation… View available downloads →