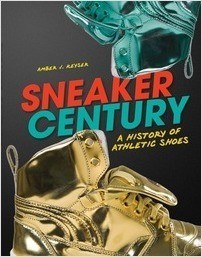 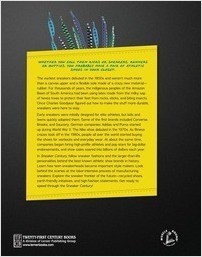 A History of Athletic Shoes

Whether you call them kicks or sneakers, runners or gutties, you probably have a pair of athletic shoes in your closet. The earliest sneakers debuted in the 1800s and weren’t much more than a canvas upper and a flexible sole made of a crazy new material—rubber. The stuff might have been new to Americans then, but for thousands of years, the indigenous peoples of the Amazon Basin of South America had been using latex made from the milky sap of hevea trees to protect their feet from rocks, sticks, and biting insects. Once Charles Goodyear figured out how to make the stuff more durable, sneakers were here to stay.

Early sneakers were initially designed for elite athletes, but kids and teens quickly adopted them. Some of the first brands included Converse, Brooks, and Saucony. German companies Adidas and Puma started up during World War II. The Nike shoe debuted in the 1970s (with a bit of inspiration from a waffle iron). As fitness crazes took off in the 1980s, people all over the world started buying the shoes for workouts and everyday wear. At about the same time, companies began hiring high-profile athletes and pop stars for big-dollar endorsements, and shoe sales soared into the stratosphere to the tune of billions of dollars each year.

In Sneaker Century, follow sneaker fashions and the larger-than-life personalities behind the best known athletic shoe brands in history. Learn how teen sneakerheads became important style makers and drove the success of NIKE, Inc., and other shoe companies. Look behind the scenes at the labor-intensive process of manufacturing sneakers. Explore the sneaker frontier of the future—recycled shoes, earth-friendly initiatives, and high-fashion statements. Get ready to speed through the Sneaker Century!

“Readers of all stripes will appreciate the role sneakers play in our lives. A fun and informative addition.” —School Library Journal

“Keyser offers an illuminating synthesis of history, science, commerce, and sports that shows why kicks are where it’s at….This will be popular.” —Booklist

“An illuminating and amusing look at a subject with much more history than one might expect.” —Kirkus Reviews