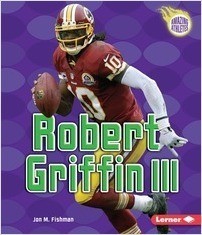 Robert Griffin III is one of the most exciting young quarterbacks in the National Football League (NFL). Few quarterbacks in the world have Robert’s remarkable combination of running speed and strong throwing arm. In Robert’s first NFL season in 2012, he led the Washington Redskins to a 10-6 record. The team made the playoffs for the first time in five years. Follow Robert’s journey from his childhood living on U.S. Army bases to the top of the football world.