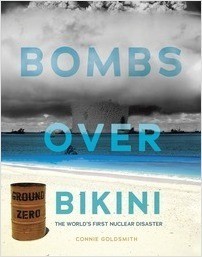 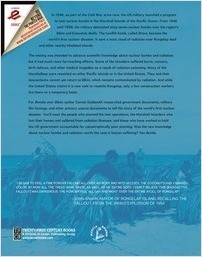 In 1946, as part of the Cold War arms race, the US military launched a program to test nuclear bombs in the Marshall Islands of the Pacific Ocean. From 1946 until 1958, the military detonated sixty-seven nuclear bombs over the region’s Bikini and Enewetak Atolls. The twelfth bomb, called Bravo, became the world’s first nuclear disaster. It sent a toxic cloud of radiation over Rongelap Atoll and other nearby inhabited islands.

The testing was intended to advance scientific knowledge about nuclear bombs and radiation, but it had much more far-reaching effects. Some of the islanders suffered burns, cancers, birth defects, and other medical tragedies as a result of radiation poisoning. Many of the Marshallese were resettled on other Pacific islands or in the United States. They and their descendants cannot yet return to Bikini, which remains contaminated by radiation. And while the United States claims it is now safe to resettle Rongelap, only a few construction workers live there on a temporary basis.

For Bombs over Bikini, author Connie Goldsmith researched government documents, military film footage, and other primary source documents to tell the story of the world’s first nuclear disaster. You’ll meet the people who planned the test operations, the Marshall Islanders who lost their homes and suffered from radiation illnesses, and those who have worked to hold the US government accountable for catastrophically poor planning. Was the new knowledge about nuclear bombs and radiation worth the cost in human suffering? You decide.

“Goldsmith employs a reasoned tone, setting events within the context of realistic Cold War apprehensions, but allowing facts to speak eloquently for themselves.” —The Bulletin of the Center for Children’s Books

“The black-and-white period photos are an excellent accompaniment to the text. A well-written book about a painful piece of history, this is an excellent addition.” —School Library Journal

“With deft, well-researched precision, Goldsmith explores the ethical implications of nuclear testing….A stirring addition to any classroom discussion about the environment.” —Booklist

In 1946, as part of the Cold War arms race, the US military launched a program to test nuclear bombs in the Marshall Islands of the Pacific Ocean. From 1946 until 1958, the military detonated sixty-seven nuclear bombs over the region’s Bikini and Enewetak Atolls. The twelfth bomb,… View available downloads →