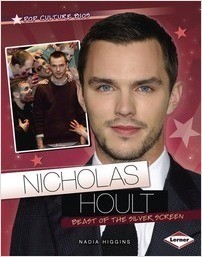 Beast of the Silver Screen

You may know that Nicholas Hoult commands the big screen as Beast in X-Men. But did you know that he:
• is a huge admirer of Muhammad Ali and sleeps underneath a poster of the boxing legend?
• fell in love with acting at the age of three when he went to see his brother in a play?
• calls reading his sisters’ magazines his favorite guilty pleasure?

Want to know more about the life of this talented actor? Read on to learn all about Nicholas’s early years, parents and sibs, first acting job, love life, future films, and more!

“Shorter than many easy-read biographies, these volumes are jam-packed with information yet manage to avoid a busy appearance on the page and information overload.” —VOYA

Nadia Higgins is the author of 50-plus books for the school library market. She also worked as an editor in the industry for almost ten years. Many of her books have a science bent, though she's also written about pop stars, car art, and zombies. Nadia lives in Minneapolis with her husband and two young daughters.