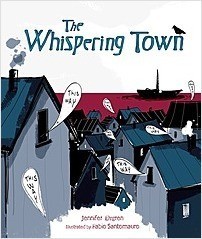 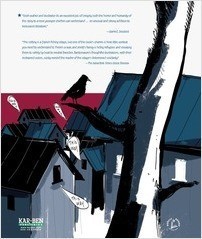 The dramatic story of neighbors in a small Danish fishing village who, during the Holocaust, shelter a Jewish family waiting to be ferried to safety in Sweden.

It is 1943 in Nazi-occupied Denmark. Anett and her parents are hiding a Jewish woman and her son, Carl, in their cellar until a fishing boat can take them across the sound to neutral Sweden. The soldiers patrolling their street are growing suspicious, so Carl and his mama must make their way to the harbor despite a cloudy sky with no moon to guide them. Worried about their safety, Anett devises a clever and unusual plan for their safe passage to the harbor.

Based on a true story.

“This picture book with a graphic novel sensibility tells the story of a young girl, Anett, whose family is harboring Jewish refugees in a Danish fishing village. Anett brings food to the mother and child hidden in her cellar, and helps guide them to boats on one moonless night. The title is derived from her suggestion that the whole town whisper directions to the pair to ensure they don’t get lost. Though the book was originally suggested for the 7 to 11 age range, our reviewer, Elizabeth Wein, said it felt appropriate as an introduction to the Holocaust for younger children.”

“This slim volume is highly recommended for its fine read, for its introduction to sound historical fiction and for its gentle look at a difficult past that cannot be ignored.” — Jewish Book World

“Both author and illustrator do an excellent job of bringing both the horror and humanity of this story to a level younger children can understand, and there is much of both: Nazis pounding on doors; Carl giving Anett his most prized possession, a heartshaped stone, a last gift from his father. An unusual and strong addition to Holocaust literature.” — Booklist

Bulletin of the Center for Children's Books (Univ. of Illinois)

“The spare storytelling style is perfectly matched with the sophisticated yet accessible illustrations, composed of black lines, fields of digital color, and scratchy pen details . . . This is a notable early introduction to the Danish resistance that deserves wide readership.” — Bulletin of the Center for Children’s Books

“Rounding out this literary threesome of resistance and escape is ‘The Whispering Town,’ a picture book written by Jennifer Elvgren and illustrated by Fabio Santomauro. The setting is a Danish fishing village, but one of the book’s charms is how little context you need to understand it: There’s a war, and Anett’s family is hiding refugees and sneaking them to safety by boat to neutral Sweden. Anett’s job is to bring food to the Jewish mother and child hidden in her basement, where she finds her way down the dark stairs by following the sound of their whispers. When Anett’s father worries that the refugees might get lost in the dark when they flee to the harbor, Anett suggests the whole village whisper directions to them as they go. The publisher of ‘The Whispering Town’ recommends the book for children ages 7 to 11, but it feels appropriate for reading to very young children as an introduction to the subject of the Holocaust. It’s definitely the least harrowing of the three books. The threat to the escaping mother and child is only hinted at in the bales of barbed wire that accompany the Nazi soldiers whenever they appear, in the worrying absence of the father in the Jewish family group, and in the villagers’ ominous, repeated warning: ‘Stay safe.’ Santomauro’s thoughtful illustrations, with their restrained colors, subtly remind the reader of the village’s determined solidarity.” — The New York Times Book Review

“The direct simplicity of the story’s telling serves well as an introduction for younger children to the Holocaust. Dark cartoon sketches reminiscent of Tomi Ungerer in opaque black, blues, grays and khaki green markers and word bubbles with the key words of direction paint the ominous atmosphere. This uncomplicated narrative of Danish resistance will facilitate teaching and discussion of a difficult yet necessary subject.” — Kirkus Reviews

“Based on real events that unfolded in the Danish fishing town of Gilleleje, it’s a story that feels urgent and refreshingly unsentimental. Elvgren (Josias, Hold the Book) never stops her reportorial storytelling for a speech about why these brave people are defying the Nazis—Annet just knows she has to act. Santomauro, who has a distinctly graphic novel sensibility, uses strong ink lines and a rich neutral palette (save for a few splashes of red) to convey a sense of secrecy, high stakes, and profound moral courage.” — Publisher’s Weekly

Jennifer Elvgren, award-winning author of The Whispering Town and Josias, Hold the Book, is a former print journalist who finds her story ideas in real life. She lives in Albemarle County, Virginia. With her husband, three children Caspian the border collie, Copperfield the foxhound, and Goodnight Moon the American quarter horse.