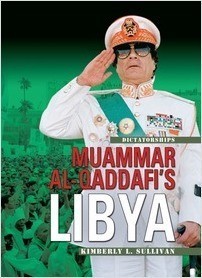 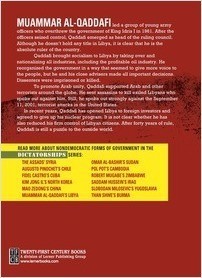 Muammar al-Qaddafi led a group of young army officers who overthrew the government of King Idris I in 1961. After the officers seized control, Qadaffi emerged as head of the ruling council. Although he doesn’t hold any title in Libya, it is clear that he is the absolute ruler of the country. Qaddafi brought socialism to Libya by taking over and nationalizing all industries, including the profitable oil industry. He reorganized the government in a way that seemed to give more voice to the people, but he and his close advisers made all important decisions. Dissenters were imprisoned or killed. In the name of promoting Arab unity, Qaddafi supported Arab and other terrorists around the globe. He also sent assassins to kill exiled Libyans who spoke out against him. Still, he spoke out strongly against the September 11, 2001, terrorist attacks in the United States. In recent years, Qaddafi has opened Libya to foreign investors and agreed to give up his nuclear program. It is not clear whether he has also reduced his firm control of Libyan citizens. After forty years of rule, Qaddafi is still a puzzle to the outside world.

Kimberly Sullivan enjoys writing both fiction and nonfiction. Her nonfiction books for young adult readers include Muammar al-Qaddafi's Libya and Slobodan Milosevic's Yugoslavia. She holds a Ph.D. in political science and has been a college instructor for 13 years. Kim is a lifelong Illinois resident and currently resides in the Chicago suburbs with her husband, son, and an assortment of formerly stray cats. For more information about Kim's work, including excerpts and some very bad advice for students and aspiring writers, please visit www.KOsbornSullivan.com.