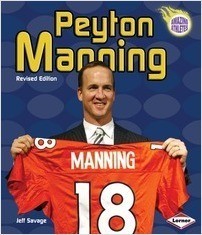 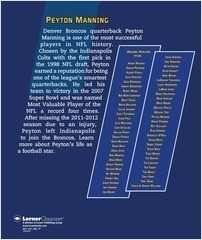 Denver Broncos quarterback Peyton Manning is one of the most successful players in NFL history. Chosen by the Indianapolis Colts with the first pick in the 1998 NFL draft, Peyton earned a reputation for being one of the league’s smartest quarterbacks. He led the Colts to victory in the 2007 Super Bowl and was named Most Valuable Player of the NFL a record four times. After missing the 2011-2012 season due to an injury, Peyton left Indianapolis to join the Broncos.