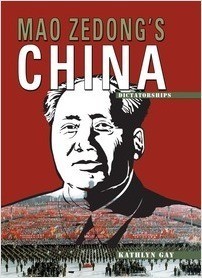 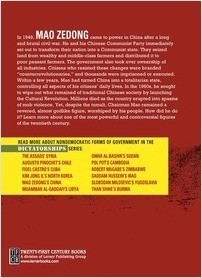 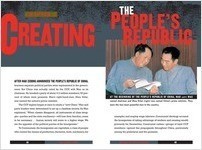 In 1949, Mao Zedong came to power in China after a long and brutal civil war. He and his Chinese Communist Party immediately set out to transform their nation into a Communist state. They seized land from wealthy and middle-class farmers and distributed it to poor peasant farmers. The government also took over ownership of all industries. Citizens who resisted these changes were branded “counterrevolutionaries,” and thousands were imprisoned or executed. Within a few years, Mao had turned China into a totalitarian state, controlling all aspects of his citizens’ daily lives. In the 1960s, he sought to wipe out what remained of traditional Chinese society by launching the Cultural Revolution. Millions died as the country erupted into spasms of mob violence. Yet, despite the tumult, Chairman Mao remained a revered, almost godlike figure, worshiped by his people. How did he do it? Learn more about one of the most powerful and controversial figures of the 20th century.

Kathlyn Gay has been writing professionally since the day her daugher was born in 1957, selling her first article after she got out of the hospital. Now with over 100 books published, including "first readers," middle grade and young adult books, encyclopedias, teacher manuals, and portions of textbooks, she still finds her life enriched by writing nonfiction work focusing on social and environmental issues, culture, and history. In recent years, she has collaborated (primarily by email) with family members across the country, sons Martin and Douglas Gay and daughter Karen Hamilton. She's married to Arthur L. Gay, a retired educator. They have lived in Illinois, California, Indiana, and now Florida. Family members include two grandchildren, Nissa Beth Gay in California and Dakota Sandoval-Gay in Washington state.