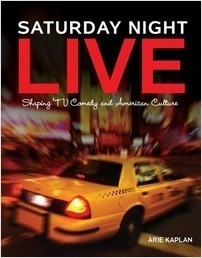 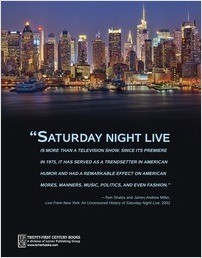 In 1975 Saturday Night Live came out of the gate swinging, with a daring, bold, and rebellious vibe that was new to television back then. With a cast of comedic actors known as the Not Ready for Prime Time Players, television producer Lorne Michaels launched a style of live television comedy that appealed specifically to young viewers with a taste for questioning authority—and that style stood the test of time. From hilarious characters—the Conehead family, Wayne Campbell, the Spartan cheerleaders, the Target Lady, and Stefon—to impressions of US presidents and politicians performed with spot-on precision, the late-night comedy show has shaped American comedy for four decades.

With millions of loyal fans across a wide range of viewership demographics, Saturday Night Live has made a significant impact on American culture. It introduced catchphrases such as “Well, isn’t that special?” and “More cowbell!” It influenced public opinion through satirical political sketches and news commentary. It provided rich material for box office hits such as The Blues Brothers and Wayne’s World. It created megastars out of dozens of comedians. And in the process, the show earned an impressive roster of accolades including thirty-six Primetime Emmy Awards, a Peabody Award, and three Writers Guild of America Awards. It’s been ranked as one of the greatest shows of all time and has been inducted into the National Association of Broadcasters (NAB) Broadcasting Hall of Fame. Discover how the SNL brand of raucous humor has stayed meaningful and fresh over the years and continues to draw audiences today.

“This book would be very useful for pop culture studies.”―Library Media Connection

They say dying is easy; it’s comedy that’s hard. And writing about comedy is hard as well. Kaplan does a fine job of detailing the history of the iconic TV show Saturday Night Live, introducing some of the cast’s biggest stars over the eras. But chronicling their finest bits—Eddie Murphy’s Mister Rogers’ Neighborhood, Dana Carvey’s Church Lady, Tiny Fey as Sarah Palin—doesn’t work very well, especially for those readers who’ve never seen them. However, there are other things this book does very well: explaining the show’s social and political impact; introducing the controversies regarding the show’s slowness in hiring writers and performers of color (and the perception of the show as a ‘boys’ club’); and showing how a weekly live television show comes together. The book contains plenty of great photographs that may entice readers to find old clips of memorable moments on YouTube. A bibliography, a quiz, and a list of SNL writers who went on to other things (Al Franken, U.S. senator) concludes.