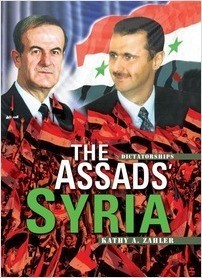 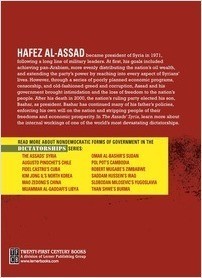 Hafez al-Assad became president of Syria in 1971, following a long line of military leaders. At first, his goals included achieving pan-Arabism, more evenly distributing the nation’s oil wealth, and extending the party’s power by reaching into every aspect of Syrians’ lives. However, through a series of poorly planned economic programs, censorship, and old-fashioned greed and corruption, Assad and his government brought intimidation and the loss of freedom to the nation’s people. After his death in 2000, the nation’s ruling party elected his son, Bashar, as president. Bashar has continued many of his father’s policies, enforcing his own will on the nation and stripping people of their freedoms and economic prosperity. In The Assads’ Syria, learn more about the internal workings of one of the world’s most devastating dictatorships.

Born in Seattle but raised in Ithaca, New York, Kathy A. Zahler has come full circle, moving back to the Finger Lakes region in 1991, marrying her best friend's brother, and continuing to write without having to live across from Tompkins Square Park. Kathy's bread-and-butter is El-Hi textbooks, and on a typical day she may work both on kindergarten math and high school literature or on 10th grade social studies test prep and MCAT Verbal Reasoning. Kathy and her husband have a newish house they built from the ground up on 150 acres of fields and woods, where they raise chickens, peacocks, guinea fowl, pheasants, chocolate and yellow labs, turtles, fish, the occasional black bear visitor, and their teenage daughter, Olivia.