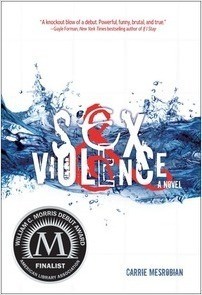 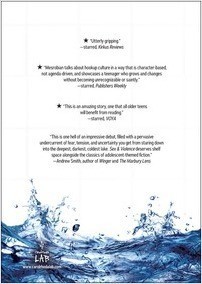 Sex has always come without consequences for seventeen-year-old Evan. Until he hooks up with the wrong girl and finds himself in the wrong place at very much the wrong time. After an assault leaves Evan scarred inside and out, he and his father retreat to the family cabin in rural Minnesota―which, ironically, turns out to be the one place where Evan can’t escape other people. Including himself. It may also offer him his best shot at making sense of his life again.

Evan Carter has always found one thing to be true for himself: he can have sex, and there’s never any consequences. Because he and his dad move around so much, Evan doesn’t stay in any one place long enough to have to make connections with people. So he uses his strategy: find The Girl Who Would Say Yes, and get down. This is foolproof until it isn’t. Until he picks the wrong girl, and pays dearly for it. After the assault, Evan and his dad pack up and move to a small lakeside town in Minnesota, and it’s there that Evan starts to heal–and deal with the fact that making connections with people is messy but kind of wonderful, too.

Carrie Mesrobian’s debut novel tackles some big issues, as the title suggests. The novel handles these issues with grace and aplomb, but what’s truly remarkable is how concerned Mesrobian is with the “after” of these big issues. This debut novel is gripping, achingly real, and absolutely unforgettable. One of the best reads of the year, this one is not to be missed.

Evan’s first-person narration is startlingly authentic, and his intense, sometimes uncomfortably frank inner-monologue will affect readers. Evan has a dark side to him, but he’s aware of it, and part of this process of healing means tackling that dark side. He’s often lewd, but it feels realistic, and the book is full of great dialogue between its characters, and this dialogue is often very funny.

The novel is packed with ideas about sex and violence and how the two are connected, but Mesrobian doesn’t offer her characters or her readers any easy answers. There’s subtle exploration of why Evan is the way he is, and what it will take for him to become a good person–and a good man–but it never feels too convenient or cliche. In Mesrobian’s capable hands, Evan’s plight is always sympathetic, and readers will root for him–even when he’s being a giant douche bag.

A cast of well-rounded, interesting secondary characters elevate this gripping story even further. There’s no shortage of vivid characters who populate Evan’s new world, but they’re all distinct, and readers will enjoy reading about Evan’s interactions with these people as he comes to grips with his new life. This is an all-around excellent first novel. I can’t wait to see what Mesrobian does next.

“A knockout blow of a debut. Powerful, funny, brutal, and true.” —Gayle Forman, New York Times Bestselling Author of If I Stay

“The dialogue is organic, crisp and true. The topics are deep and relevant—sex and violence, of course, but also gender roles, therapy, PTSD, father-son relationships, class rivalry, drug use, and more. This is an amazing story, one that all older teens will benefit from reading.” —starred, VOYA

“Crass, crude, yet accurate language amid a balance of harsh moments and sensitive transitions pepper this disconcerting but extremely well-crafted and thought-provoking story for mature teens.” —School Library Journal

“Mesrobian takes aim at big topics….By focusing on Evan, Mesrobian talks about hookup culture in a way that is character-based, not agenda-driven, and showcases a teenager who grows and changes without becoming unrecognizable or saintly.” —starred, Publishers Weekly

“This is a pitch-perfect, daring novel about how sex and violence fracture a life and the painstakingly realistic process of picking up the pieces….Utterly gripping.” —starred, Kirkus Reviews

“Sex & Violence is never what it seems. It never goes where you expect it will. It is funny, scary, brutal, and tender. It is an honest meditation on masculinity. And, it’s all delivered through the eyes of a damaged, genius-of-a-boy, Evan Carter, who you hope so hard will be okay.” —Geoff Herbach, author of Stupid Fast

“This is one hell of an impressive debut, filled with a pervasive undercurrent of fear, tension, and uncertainty you get from staring down into the deepest, darkest, coldest lake. Sex & Violence deserves shelf space alongside the classics of adolescent-themed fiction.”—Andrew Smith, author of The Marbury Lens and Stick

“Sex & Violence is an absolutely unrelenting look at life after physical and emotional trauma. It’s dark and sometimes painful to watch, but it hurts even more to look away. Evan’s story will sit with me for a very long time.”—Trish Doller, author of Something Like Normal

Carrie Mesrobian is an instructor at the Loft Literary Center in Minneapolis. Her debut novel, Sex & Violence, was called one of the best books of 2013 by Kirkus Reviews and Publishers Weekly and was a finalist for the American Library Association's William C. Morris Award for best debut young adult novel. A native Minnesotan, she lives with her husband, daughter, and dog.