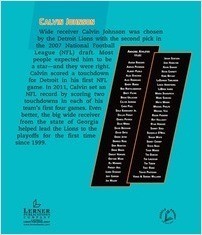 Wide receiver Calvin Johnson was chosen by the Detroit Lions with the second pick in the 2007 National Football League (NFL) draft. In 2011, Calvin set an NFL record by scoring two touchdowns in each of his team’s first four games. Even better, the big wide receiver from Georgia helped lead the Lions to the playoffs for the first time since 1999.