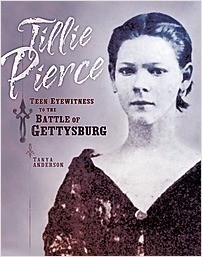 Teen Eyewitness to the Battle of Gettysburg

Imagine being fifteen years old, facing the bloodiest battle ever to take place on U.S. soil: the Battle of Gettysburg. In July 1863, this is exactly what happened to Tillie Pierce, a normal teenager who became an unlikely heroine of the Civil War (1861-1865). Tillie and other women and girls like her found themselves trapped during this critical three-day battle in southern Pennsylvania. Without training, but with enormous courage and compassion, Tillie and other Gettysburg citizens helped save the lives of countless wounded Union and Confederate soldiers.

In gripping prose, Tillie Pierce: Teen Eyewitness to the of Battle Gettysburg takes readers behind the scenes. And through Tillie’s own words, the story of one of the Civil War’s most famous battles comes alive.

“This would be a great independent read and a wonderful choice for classroom teachers looking for a nonfiction book to share with their class.” —starred, Library Media Connection

“This book offers a unique perspective through the eyes of a young woman who observed and survived the worst of war.” —School Library Journal

“. . . an extraordinary story of one teen’s courage and determination as a bloody battle rages all around her.” —New York Journal of Books

“Based mostly on Tillie’s own recollection of the conflict, which she wrote and published in 1889, this book combines that writing with Anderson’s smooth retelling to describe the weeks leading up to and following the battle from the perspective of an extremely relatable young witness….The narrative is driven home by captivating photographs of the town before and after the battle and of artifacts that were dear to the Pierce family.” —Booklist

“An insightful perspective on one of the bloodiest battles of the American Civil War seen through the eyes of a 15-year-old girl….Her eyewitness observations are vivid and compelling….Tillie’s words bring the sights, sounds and smells of a civilian and teenager experiencing war straight to today’s readers in a way a retrospective account cannot.” —Kirkus Reviews

“The text is interesting and accompanied by superior maps, sidebars, and primary source photographs. Anderson has included a well-thought out activity, ‘Taking Tillie’s Path: An Activity Using Google Earth” that will engage and fascinate readers.” —BayViews

Tanya Anderson is an award-winning editor of books for young readers. Her particular passion is to create engaging nonfiction books for reluctant readers, those who are capable readers but who have become uninterested in reading. Anderson discovered this need when she taught high school history and English. She continues in her role as a teacher and guide through the books she edits and writes.Anderson graduated from Wittenberg University in Springfield, Ohio, after a dozen years in the education field, she followed her dream of joining the children's book publishing world. She has worked for more than twenty years in various editorial functions for Pages Publishing Group/Willowisp Press, Guideposts for Teens, SRA/McGraw-Hill, Darby Creek Publishing, and now has her own book packaging company, School Street Media. Besides working with some of the most wonderful authors and illustrators in the business, Anderson has also had more than thirty books published in the children's and educational book markets.

Imagine being fifteen years old, facing the bloodiest battle ever to take place on U.S. soil: the Battle of Gettysburg. In July 1863, this is exactly what happened to Tillie Pierce, a normal teenager who became an unlikely heroine of the Civil War (1861-1865). Tillie and other women and… View available downloads → 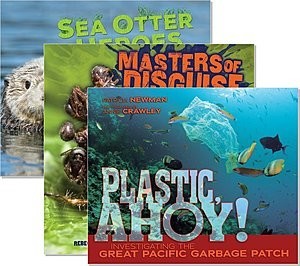