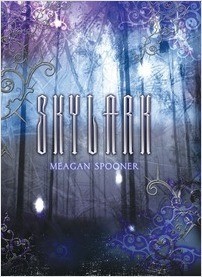 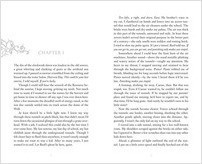 Vis in magia, in vita vi. In magic there is power, and in power, life.

For fifteen years, Lark Ainsley waited for the day when her Resource would be harvested and she would finally be an adult. After the harvest she expected a small role in the regular, orderly operation of the City within the Wall. She expected to do her part to maintain the refuge for the last survivors of the Wars. She expected to be a tiny cog in the larger clockwork of the city.

Lark did not expect to become the City’s power supply.

For fifteen years, Lark Ainsley believed in a lie. Now she must escape the only world she’s ever known…or face a fate more unimaginable than death.

Lark lives in a world powered by magic; since the war, however, magic is in short supply, so the small bits of magic with which children are born are siphoned off by the city when the children reach a certain age. Fifteen-year-old Lark hasn’t been chosen for harvesting yet, and people, including Lark herself, are beginning to wonder why. When she’s finally selected, it turns out to be for an unusual harvesting indeed, and she escapes into the wilderness to avoid becoming a human battery for the city’s power supply. Once on the run, she meets a wild boy who helps her survive the terrors of the world outside the city walls, and she finds a settlement of folks like her—people with particularly strong magic that renews itself rather than dissipating as they grow older. The settings are fantastic in both meanings of the word, and they’re beautifully drawn; Lark’s experiences add further rich detail. Unfortunately, there’s never really a full explanation of why Lark’s power is different not only from others in the city but from other Renewables, and readers never learn why or how magical resources got scarce in the first place. That may be enough to generate sustained interest in the meantime. Shades of Lowry’s The Giver (BCCB 4/93), Bick’s Ashes (BCCB 10/11), Pullman’s His Dark Materials (BCCB 4/96, 11/97, 1/01), The Matrix Trilogy, and even elements of steampunk wisp throughout the narrative at different points, but coherence depends overmuch on the temporal narration of Lark’s journey, which becomes attenuated and a little dull as she faces one unrelated danger after another. Readers who enjoy speculating about gaps that may or may not be filled may nonetheless enjoy this techno-fantasy dystopian mashup.

“Magic and technology blend seamlessly here… The current demand for grim YA renditions of a dystopian future, plus the splashy landing, will likely ensure a significant readership for fans of the genre.” —Booklist

“Intense and absorbing, Skylark transported me to a world of magic and danger unlike anything I’ve read before. I loved Lark, and was riveted by her journey of survival and self-discovery. Dark, original, and beautiful, this is a novel you don’t want to miss.” —Veronica Rossi, author of Under the Never Sky

Meagan Spooner grew up reading and writing every spare moment of the day, while dreaming about life as an archaeologist, a marine biologist, an astronaut. She graduated from Hamilton College in New York with a degree in playwriting, and has spent several years since then living in Australia. She's traveled with her family all over the world to places like Egypt, South Africa, the Arctic, Greece, Antarctica, and the Galapagos, and there's a bit of every trip in every story she writes. She currently lives and writes in Northern Virginia, but the siren call of travel is hard to resist, and there's no telling how long she’ll stay there. In her spare time she plays guitar, plays video games, plays with her cat, and reads. You can visit her online at http://www.meaganspooner.com.