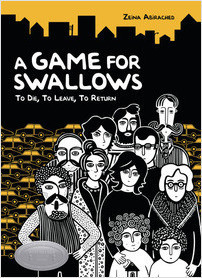 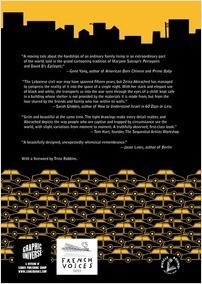 A Game for Swallows

To Die, To Leave, To Return

When Zeina was born, the civil war in Lebanon had been going on for six years, so it’s just a normal part of life for her and her parents and little brother. The city of Beirut is cut in two, separated by bricks and sandbags and threatened by snipers and shelling. East Beirut is for Christians, and West Beirut is for Muslims. When Zeina’s parents don’t return one afternoon from a visit to the other half of the city and the bombing grows ever closer, the neighbors in her apartment house create a world indoors for Zeina and her brother where it’s comfy and safe, where they can share cooking lessons and games and gossip. Together they try to make it through a dramatic day in the one place they hoped they would always be safe—home.

“While this thought-provoking memoir educates American readers on this foreign war, it also encourages them to appreciate their own freedom, safety, and comforts and to build their own communities. One night can change a lifetime.” —Foreword Magazine

“The book’s strengths are myriad. Abirached is a lovely artist, and her characters’ faces are remarkably expressive. There is much humor, a welcome relief from the chaos and heartache of the human stories within.
For young readers, ‘A Game for Swallows’ will come as a revelation. At a time when the Middle East is still in turmoil and when Americans have suffered losses of electricity and other necessities during recent storms and floods, this is a story that will hit home even as it causes young, impressionable eyes to look at life abroad.” —The New York Times

“Stark, dramatic illustrations (mostly black backgrounds with white-outlined characters and features) include repeated motifs (flowers, dragons) that effectively capture elements of the culture and lend nuance to the high emotions through small changes in expression or detail. A poignant portrayal of a community determined to hold onto optimism and humanity under dire circumstances.” —The Horn Book Magazine

“Abirached’s readers will instantly empathize with those who do not readily have access to simple luxuries many take for granted—running water, electricity or the simple return of our loved ones from an outing—and this may perhaps spur them to re-examine what they may have otherwise overlooked.

“Abirached’s b&w inks offer a stark contrast in hard, geometric patterns that make images at once abstract and fully representative of her childhood memories. The characters, despite their cartoonish nature, show a variety of emotions, and Abirached’s gift for pacing makes tense moments appropriately full of anxiety. It is as often the space she leaves empty as the drawings themselves that tell the story—and each detail offered provides insight into the horrors of growing up in a war zone. A winner for young readers and adults alike.” —Publishers Weekly

“As she puts an accessible face on a foreign culture through her characters, Abirached also distinguishes her piece with striking and unique design work. Her use of heavily contrasted black-and-white spaces, as well as elegant flourishes like crowding an anxious room with ticks and tocks, suggests an impressive new talent following in the footsteps of an established master.” —Booklist

Zeina Abirached was born in Beirut in the middle of the civil war. She studied graphic arts in Lebanon but moved to Paris in 2004, where she attended the National School of Decorative Arts. In 2006, she published her first two graphic novels with publisher Cambourakis, Beyrouth-Catharsis and 38, Rue Youssef Semaani. Her short animated film Mouton was nominated during the fifth international film festival in Tehran. A Game For Swallows (Graphic Universe, 2012) has won numerous awards, including being named an ALA Notable Children's Book and a YALSA Great Graphic Novel for Teens. Je Me Souviens Beyrouth (I Remember Beirut), the follow-up to A Game For Swallows, was published in French by Cambourakis in 2008.