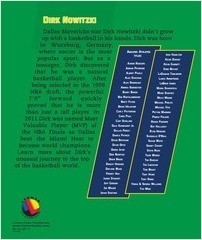 Dallas Mavericks star Dirk Nowitzki didn’t grow up with a basketball in his hands. Dirk was born in Wurzburg, Germany, where soccer is the most popular sport. But as a teenager, Dirk discovered that he was a natural basketball player. After being selected in the 1998 NBA draft, the powerful 7’0" forward quickly proved that he is more than just a tall player. In 2011 Dirk was named Most Valuable Player (MVP) of the NBA Finals as Dallas beat the Miami Heat to become world champions. Learn more about Dirk’s unusual journey to the top of the basketball world.