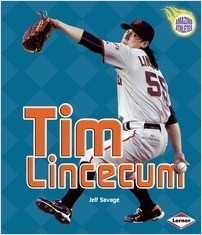 At 5’11" and 165 pounds, San Francisco Giants pitcher Tim Lincecum is much smaller than the usual Major League Baseball player. Growing up in Renton, Washington, Tim was told he was too small to be a star athlete. He proved people wrong by winning the National League Cy Young Award in 2008 as the league’s best pitcher. Then he won the award again in 2009. Tim secured his place as one of baseball’s greatest pitchers by helping the Giants win the World Series in 2010. Learn more about Tim’s amazing life and career.