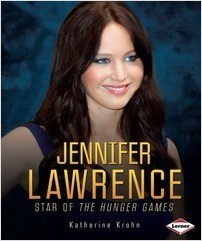 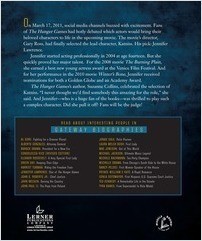 Star of The Hunger Games

On March 17, 2011, social media channels buzzed with excitement. Fans of The Hunger Games had hotly debated which actors would bring their beloved characters to life in the upcoming movie. The movie’s director, Gary Ross, had finally selected the lead character, Katniss. His pick: Jennifer Lawrence.

Jennifer started acting professionally in 2004 at age fourteen. But she quickly proved her major talent. For the 2008 movie The Burning Plain, she earned a best new young actress award at the Venice Film Festival. And for her performance in the 2010 movie Winter’s Bone, Jennifer received nominations for both a Golden Globe and an Academy Award.

The Hunger Games‘s author, Suzanne Collins, celebrated the selection of Katniss. "I never thought we’d find somebody this amazing for the role," she said. And Jennifer—who is a huge fan of the books—was thrilled to play such a complex character. Did she pull it off? Fans will be the judge!

“Libraries can expect a good bit of demand over the next few years, as this phenomenally popular trilogy hits the big screen.” —Booklist