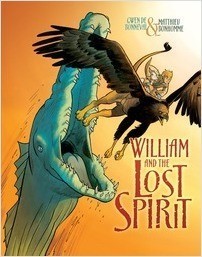 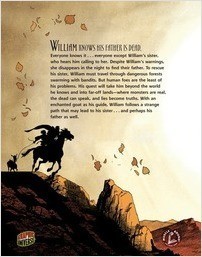 William and the Lost Spirit

William knows his father is dead. Everyone knows it . . . everyone except William’s sister, who hears him calling to her. Despite William’s warnings, she disappears in the night to find their father. To rescue his sister, William must travel through dangerous forests swarming with bandits. But human foes are the least of his problems. His quest will take him beyond the world he knows and into far-off lands—where monsters are real, the dead can speak, and lies become truths. With an enchanted goat as his guide, William follows a strange path that may lead to his sister . . . and perhaps his father as well.

“The story moves along, and there are crisp illustrations with translator’s notes and discussion topics.” —Library Media Connection

“The book is most remarkable in its layers—it is a magical adventure story, it is the story of a boy trying to find his father, and it is the story of a boy who learns difficult lessons and matures while on his journey. Many teens will be intrigued by this title because of the eye-catching cover and illustrations, and thoughtful readers will be captivated by William and grow with him as he explores his world.” —School Library Journal

“[T]he art is intricate and gorgeously lit. The realism lends weight to the time period and the fantasy elements….For readers willing to let go of preconceptions, this will provide an engaging journey.” —Booklist

“There’s more to the book than meets the eye, and multiple readings reveal even more subtext. What does meet the eye, though, is quite nice, thanks to Bonhomme’s impeccable linework and breakdowns, as well as clean, if traditional, layouts.” —Publishers Weekly