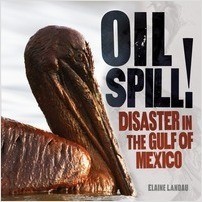 Disaster in the Gulf of Mexico

The oil spill was the largest in U.S. history. In April 2010, the Deepwater Horizon drilling rig exploded and sank. Oil gushed into the Gulf of Mexico from a deep ocean well. For months, the energy company BP tried to control the leak. More than four million barrels of oil flowed into the Gulf before the well was stopped. Fishers, shrimpers, and many others along the Gulf coast lost their income as polluted water prevented fishing and stifled tourism.

Meanwhile, countless workers tried to contain the spilled oil. Boat crews skimmed the oil slicks on the surface. Scientists poured chemicals into the water to break up the oil. Then bacteria could remove the smaller oil droplets from the water. Wildlife organizations rescued oil-slicked pelicans, turtles, and other animals. The government, together with BP and volunteers, rallied to help coastal areas recover.

Oil Spill! explores the Gulf of Mexico disaster from the beginning. With vivid images and diagrams, it breaks down the murky mess to look at how it happened, how it affected the Gulf, how it compares to past spills, and how kids can help the area recover.

“Highly relevant and informative, this book offers a valuable account of the events leading up to, causing, and resulting in what may be America’s worst environmental disaster.” —School Library Journal

“Throughout, Landau applies the clear-sighted, nonalarmist tone of a veteran science writer but still manages to infuse the narrative with nearly the same urgency as an edge-of-your-seat disaster flick…. A spate of books on this topic are likely on the horizon, but few are likely to surpass this one.” —Booklist