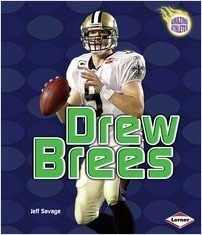 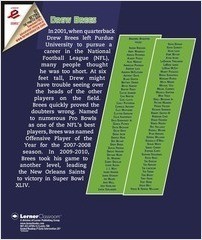 When quarterback Drew Brees left Purdue University to pursue a career in the National Football League (NFL) in 2001, many people thought he was too short. At six feet tall, they wondered if he would be able to see over the heads of the other players on the field. Brees quickly proved the doubters wrong. Named to numerous Pro Bowls as one of the NFL’s best players, Brees was named Offensive Player of the Year for the 2007-2008 season. In 2009-2010 Brees took his game to another level, leading the New Orleans Saints to victory in Super Bowl XLIV.