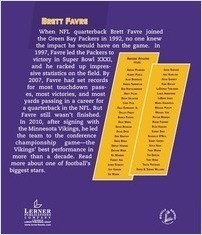 When NFL quarterback Brett Favre joined the Green Bay Packers in 1992, no one knew the impact he would have on the game. In 1997 Favre lead the Packers to victory in Super Bowl XXXI, and he racked up impressive statistics on the field. By 2007 Favre had set records for most touchdown passes, most victories, and most yards passing in a career for a quarterback in the NFL. But Favre still wasn’t finished. In 2010 he led the Minnesota Vikings to the conference championship game―the team’s best performance in more than a decade. Read more about one of football’s biggest stars.