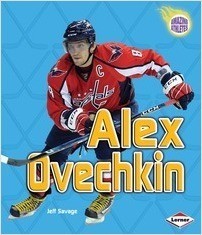 When Washington Capitals left wing Alex Ovechkin entered the NHL for the 2005-2006 season, he didn’t waste any time. He immediately became one of the game’s best players. Alex scored 52 goals during his rookie season, and he hasn’t slowed down since. In 2007-2008 Alex scored 65 goals, the most in the NHL in more than a decade. But Alex and his teammates have an even bigger goal in mind—winning the Stanley Cup. Learn more about Alex’s amazing journey from his birthplace in Moscow, Russia, to the top of the NHL.