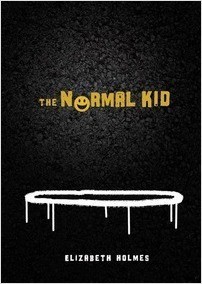 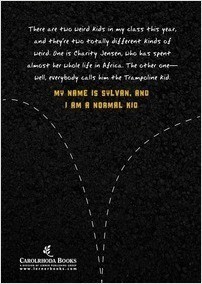 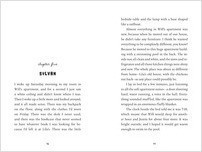 Sylvan has been angry ever since his parents split up. And now that an embarrassing photo has appeared in the paper, he’s stuck with a lame nickname too. Charity is back in the United States after several years in Africa. And she’s learning that home can be a strange place when you’ve been away for a while. Neither of them knows what’s up with Brian. He spends whole afternoons alone on his trampoline. From the first day of school, Sylvan knows he doesn’t want to hang out with weirdoes like Charity or Brian. He’d rather just be a normal kid. But when the principal gets ready to fire their favorite teacher, Sylvan, Charity, and Brian have to find a way to work together.

“Holmes is a capable and affecting stylist… Readers may enjoy the dynamics of the school story, and they’ll appreciate the message that even difficult transitions are survivable.” —Bulletin of the Center for Children’s Books

“Holmes constructs a sturdy story that examines preconceptions and the sting of social rejection, combined with credible character development. Sylvan and Charity’s alternating perspectives reveal how taking chances on friendships can broaden and enrich one’s awareness of the world.” —Publishers Weekly Online

“Told in the voices of Sylvan and Charity, this novel offers a well-balanced look at two kids who are realizing how events affect individuals—and how they themselves are affected deeply by events they want to ignore… Fans of school stories by Gary Schmidt or Jerry Spinelli will find this engaging as well as thought provoking.” —Booklist

“This well-told story captures a pivotal life experience: What we’ve assumed was permanent, bedrock reality can shift beneath us without warning. ‘Normal’ changes. If it’s a tough lesson, it’s also liberating…. Pre-adolescent angst—funny, perplexing humiliating—is perennially fertile ground for middle-grade fiction. Holmes shows us where it comes from and where it can take us if we let it.”—Kirkus Reviews

“Readers will understand and relate to the social pressure they struggle to navigate and their desire to fit in.” —School Library Journal

Elizabeth Holmes grew up in Tennessee and after finishing college worked for a year as a teacher in Kenya. She published two books of poetry for adults before turning to writing for children. The Normal Kid is her third middle-grades novel; the first two are Pretty Is and Tracktown Summer. She lives in Ithaca, New York, with her husband, two sons, and three cats.