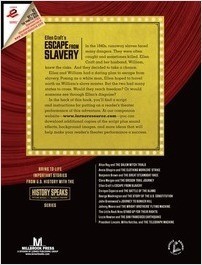 In the 1840s, runaway slaves faced many dangers. They were often caught and sometimes killed. Ellen Craft and her husband William knew the risks. And they decided to take a chance.

Ellen and William had a daring plan to escape from slavery. Posing as a white man, Ellen hoped to travel north as William’s slave master. But the two had many states to cross. Would they reach freedom? Or would someone see through Ellen’s disguise?