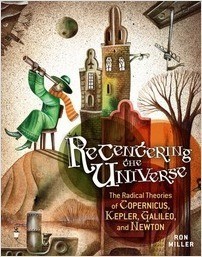 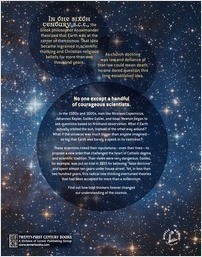 The Radical Theories of Copernicus, Kepler, Galileo, and Newton

In the sixth century B.C.E., the Greek philosopher Anaximander theorized that Earth was at the center of the cosmos. That idea became ingrained in scientific thinking and Christian religious beliefs for more than one thousand years. Defiance of church doctrine could mean death, so no one dared dispute this long-accepted idea. No one except a handful of courageous scientists.

In the 1500s and 1600s, men like Nicolaus Copernicus, Johanned Kepler, Galileo Galilei, and Isaac Newton began to ask questions. What if Earth actually orbited the sun, instead of the other way around? What if the universe was much bigger than anyone imagined?

These scientists risked their reputations—even their lives—to challenge the very heart of Catholic dogma and scientific tradition. Yet, in less than 200 years, their radical thinking overturned theories that had lasted more than a millennium. Join these bold thinkers on the journey of discovery that forever changed our understanding of the cosmos.

“Miller’s book provides a well-written, interesting, and informative history of our understanding of the universe….Libraries looking to spruce up their nonfiction collections, especially with readable science texts, should certainly add this.” —VOYA

“The book’s illustrations are well chosen and include archival images of the universe as well as photos of sites and artifacts. A solid discussion of a pivotal time in science history.” —Booklist

“This is a useful, first purchase for astronomy report writers and those seeking biographical information about important scientists.” —School Library Journal