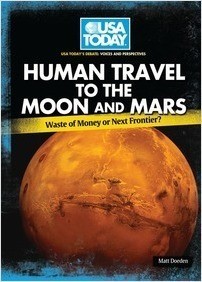 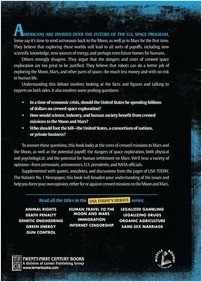 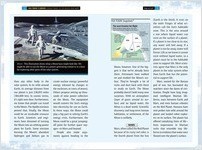 Human Travel to the Moon and Mars

Waste of Money or Next Frontier?

Americans are divided over the future of the U.S. space program. Some say it’s time to send astronauts back to the Moon, as well as to Mars for the first time. They believe that exploring these worlds will lead to all sorts of payoffs, including new scientific knowledge, new sources of energy, and perhaps even future homes for humans.

Others strongly disagree. They argue that the dangers and costs of crewed space exploration are too great to be justified. They believe that robots can do a better job of exploring the Moon, Mars, and other parts of space—for much less money and with no risk to human life.

Understanding this debate involves looking at the facts and figures and talking to experts on both sides. It also involves some probing questions:

• In a time of economic crisis, should the United States be spending billions of dollars on crewed space exploration?
• How would science, industry, and human society benefit from crewed missions to the Moon and Mars?
• Who should foot the bill—the United States, a consortium of nations, or private business?

To answer these questions, this book looks at the costs of crewed missions to Mars and the Moon, as well as the potential payoff; the dangers of space exploration, both physical and psychological; and the potential for human settlement on Mars. We’ll hear a variety opinions—from astronauts, astronomers, U.S. presidents, and NASA officials.

Supplemented with quotes, anecdotes, and discussions from the pages of USA TODAY, The Nation’s No. 1 Newspaper, this book will broaden your understanding of the issue and help you form your own opinion, either for or against crewed missions to the Moon and Mars.