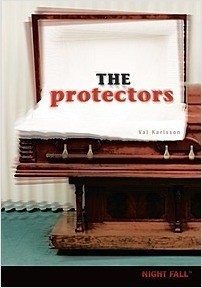 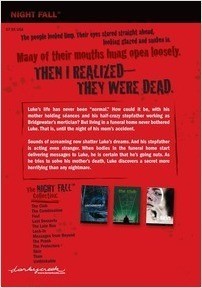 From the Series Night Fall ™

Luke’s life has never been “normal.” How could it be, with his mother holding séances and his half-crazy stepfather working as Bridgewater’s mortician? But living in a funeral home never bothered Luke. That is, until the night of his mom’s accident.

Sounds of screaming now shatter Luke’s dreams. And his stepfather is acting even stranger. When bodies in the funeral home start delivering messages to Luke, he is certain that he’s going nuts. As he tries to solve his mother’s death, Luke discovers a secret more horrifying than any nightmare.

“The excerpt from Edgar Allan Poe’s ‘The Raven’ that opens The Protectors is astutely chosen. Beyond the dark, macabre content that fills the tale, Karlsson weaves a story that is highly readable in one sitting—a quality Poe would appreciate—and a narrative fabric that finds its heritage in Poe’s accounts of ratiocination, horror, and the grotesque.” —The ALAN Review

“These short horror stories are set in the town of Bridgewater, where things are never quite what they seem. The stories are uniformly creepy and full of spirits and demons, as good rises up to fight evil. One title is about a boy who works in a funeral home and receives messages from the dead; another about a girl who travels to a dream world to rescue her best friend; and the third is about a boy who is possessed by a demon. Younger fans of horror might enjoy these stories, but I found them more vaguely unpleasant than truly scary.” —Library Media Connection

“the goings-on in the lonely funeral home are effectively eerie, and the details of cadaver restoration and embalming give the novel a believable (if kinda icky) edge. If your teens dig this, try the other books in the Night Fall series, all of which take place in the unlucky town of Bridgewater.” —Booklist