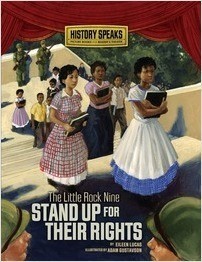 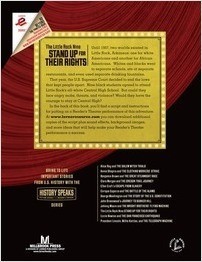 The Little Rock Nine Stand Up for Their Rights

Until 1957, two worlds existed in Little Rock, Arkansas: one for white Americans and another for African Americans. Whites and blacks went to separate schools, ate at separate restaurants, and even used separate drinking fountains. That year, the U.S. Supreme Court decided to end the laws that kept people apart. Nine black students agreed to attend Little Rock’s all-white Central High School. But could they face angry mobs, threats, and violence? Would they have the courage to stay at Central High? In the back of this book, you’ll find a script and instructions for putting on a reader’s theater performance of this adventure. At our companion website—www.lerneresource.com—you can download additional copies of the script plus sound effects, background images, and more ideas that will help make your reader’s theater performance a success.

Eileen (O'Donnell) Lucas grew up in Chicago, spent a semester in college in Ireland, and graduated from Western Illinois University. She lived near Lake Geneva, Wisconsin, for over 20 years, where her sons Travis and Brendan were born. She worked as a freelance writer and an elementary and middle school teacher during these years. She now lives in Florida, where she loves to go to the beach and listen to Jimmy Buffett music. She also loves to visit her trailer in the woods in central Wisconsin, where she takes care of her garden and hikes in the pines. Besides nonfiction children's books, she writes for an educational software publishing company in Wisconsin.

Adam Gustavson majored in illustration at Rowan University and received his Master's at the School of Visual Arts in New York City. He has taught art classes at Passaic County Community College and Seton Hall University. He lives in West Orange, New Jersey, with his wife and two sons.