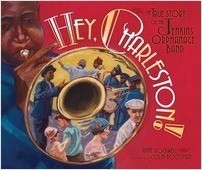 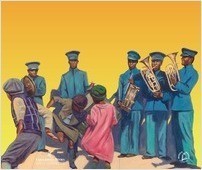 The True Story of the Jenkins Orphanage Band

What happened when a former slave took beat-up old instruments and gave them to a bunch of orphans? Thousands of futures got a little brighter and a great American art form was born.

In 1891, Reverend Daniel Joseph Jenkins opened his orphanage in Charleston, South Carolina. He soon had hundreds of children and needed a way to support them. Jenkins asked townspeople to donate old band instruments—some of which had last played in the hands of Confederate soldiers in the Civil War. He found teachers to show the kids how to play. Soon the orphanage had a band. And what a band it was.

The Jenkins Orphanage Band caused a sensation on the streets of Charleston. People called the band’s style of music "rag"—a rhythm inspired by the African American people who lived on the South Carolina and Georgia coast. The children performed as far away as Paris and London, and they earned enough money to support the orphanage that still exists today. They also helped launch the music we now know as jazz.

Hey, Charleston! is the story of the kind man who gave America “some rag” and so much more.

“Rockwell’s informative text is lively and accessible, and Bootman’s realistic, full-spread paintings capture the era and energy of the musicians and onlookers dancing and clapping to the beat.” —School Library Journal

“Rockwell relates her tale in a fast-paced narrative that will hopefully encourage readers to turn into listeners. Bootman’s emotive, full-bleed artwork provides a lively accompaniment. A notable look at a little-known piece of jazz history.” —Kirkus Reviews

Anne Rockwell is the author of Hey, Charleston!:The True Story of the Jenkins Orphanage Band, which was a Junior Library Guild Selection. She lives in Stamford, Connecticut.

What happened when a former slave took beat-up old instruments and gave them to a bunch of orphans? Thousands of futures got a little brighter and a great American art form was born. In 1891, Reverend Daniel Joseph Jenkins opened his orphanage in Charleston, South Carolina… View available downloads →