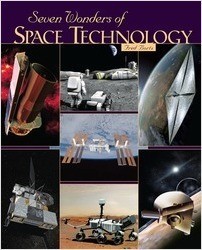 From earliest times, humans have looked to the sky in wonder, and their wonder and curiosity fueled science. Ancient peoples built enormous temples and monuments to observe the sun and track the movement of stars. And as scientific knowledge expanded, technologies grew more sophisticated. Each development changed the way we viewed our place in the universe. But no technology changed our understanding more than the ability to launch scientific equipment—and human explorers—into space.
In this book, we’ll explore seven wonders of space technology. Scientists and engineers have built vehicles and equipment to explore the farthest reaches of the solar system. Orbiting satellites and telescopes have given us everything from more accurate weather reports to glimpses back to the beginning of the universe. International teams have built an orbiting space laboratory and are working on plans for human lunar settlements and missions to other planets. Learn about the people and the science behind these amazing advances in space technology.

“Although this profusely illustrated book may seem short, it really is worth the price!” —Science Books & Films

“This book is highly recommended for the capable and/or talented reader in middle school, and up through high school. The text is readable but the content is deep and the information is wide-ranging and detailed. It would provide many anecdotes and interesting detail for the teacher who gives mini-lectures as well.” —NSTA