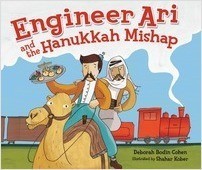 Engineer Ari and the Hanukkah Mishap

Hurrying home to celebrate Hanukkah, Engineer Ari screeches his train to a halt to avoid hitting a stubborn camel sitting on the tracks. The camel’s Bedouin owner invites Ari to his tent to await help, where the two have an impromptu Hanukkah celebration, and become friends.

“Engineer Ari returns for another holiday story in Engineer Ari and the Hanukkah Mishap. Ari drives a train in 1890s Ottoman Palestine, when the 55-mile rail link between Jerusalem and Jaffa, on the Mediterranean coast, opened.

It’s almost the start of Hanukkah and Ari has barely enough time to drive the train from Jerusalem back to Jaffa to light the first candle together with friends.

As he makes his way through Jerusalem to the train station, he meets up with kids who recount the Hanukkah story.

Then, outside Jerusalem, Ari’s train nearly hits a camel sitting on the tracks. Slamming on the brakes, Ari stops short of the camel but his Hanukkah supplies fo flying and the caboose jumps the track.

The Bedouim owner of the camel comes to Ari’s aid, and so occurs an unusual first-night Hanukkah celebration and a new friendship.

And it all happens right at Modi’in, the home of the Macabbees, where the story of Hanukkah began.

With delightful illustrations, this is an upbeat, heart-warming story.”—Chicago Jewish Star

“Engineer Ari and his red steam engine return to celebrate the Festival of Lights. As Ari hurries to the Jerusalem station with his arms full of packages, he passes two boys reenacting the triumph of the Maccabees and two girls playing dreidel to commemorate Hanukkah’s great miracle. Ari is looking forward to returning to Jaffa so he can celebrate with his friends but when his train encounters a stubborn camel on the tracks in Modi’in, it is a Bedouin shepherd who comes to his aid. Ari asks his new friend, Kalil, to join him while he lights the Hanukkiah and eats his sufganiyot. Once again, young readers will enjoy the familiar elements of the holiday and also the simple charm of Engineer Ari, whose friendly, earnest demeanor makes these books such a pleasure to read. Of particular note are the girls’ dreidels that display the Hebrew letters Nun, Gimel, Hay, and Pay (Nes Gadol Hayah Po), reminding children that the great miracle of Hanukkah happened ‘here’ in the Land of Israel. Combining cheerful illustrations, a friendly text, appealing characters and a bright red train, this book will have children chanting ‘Toot! Toot!’ for eight days and nights. Includes a brief description of the holiday, a glossary, and a photo-history of the first steam engine to travel between Jerusalem and Jaffa in 1892.”—Engineer Ari and the Hanukkah Mishap

“It’s Hanukkah and Engineer Ari is off in his train to celebrate the holiday with his friends, Jessie and Nathaniel. He is carrying traditional sufganiyot (jelly donuts), dreidels, and Turkish coins. His Hannukiah (the correct name for the holiday candelabra) travels with him, too. Along the way, he passes children playing Maccabees and Syrians which leads to a streamlined retelling of the Hanukkah story. Interestingly, the way the story is phrased implies that there were not one but two Hanukkah miracles, the second being the defeat of the greater Syrian army by the small band of Jewish guerilla fighters. Little girls near the tracks play dreidel, but since the story takes place in Jerusalem, the letters on the spinning toy represent, ‘A miracle happened here,’ rather than the Diaspora translation of, ‘A miracle happened there.’ As Ari takes off on his journey, his train is derailed by a wayward camel and his presents are spilled from the train. A friendly Bedouin shepherd helps to retrieve the gifts and offers Ari traditional hospitality as they share Ari’s celebration on the first night of the holiday. By the time Jessie and Ari arrive from Jaffa to help right the train, Ari has solidified a new friendship and discovered that he is celebrating the holiday on the actual site of the Maccabees’ uprising. There’s a lot of good historical information packed into this charming book, and the synopsized story of the origin of the holiday is perfectly woven into the story of new friends, old traditions, all illustrated with cheery and colorful pictures children will love.”—Children’s Literature Comprehensive Database

“Candles, latkes, gifts— Chanukah traditions bring light and joy to the dark days of winter. As you select presents for your children, we urge you to give them books. Each year, publishers offer new Chanukah titles, and this year there are some great choices. We gathered recently to discuss the new crop of Chanukah books:

AMY: Another good choice, and quite unique, is Nathan Blows Out the Hanukkah Candles by Tami Lehman-Wilzig, one of Kar-Ben Publishing’s reliable authors. In this story, young Jacob loves his autistic brother, Nathan, but is afraid Nathan will embarrass him by blowing out the Chanukah candles when their new neighbors come to celebrate with the family. The issue of autism is addressed honestly as the story shows Jacob both protecting and resenting his brother.

JUDY: I thought this was one of the best ones published this year, and it is unusual as it combines the holiday with an issue that many families deal with daily. It is very well told, and aimed at many people in the family. Really well done—and a good conversation starter.” —Jewish Community Voice

"This is a timely teaching story by Deborah Bodin Cohen that brings a devout Jew together with a Bedouin on a Jewish holiday rich with history and meaning. The mutual hospitality of the two men is a miracle in its own right. " —Spirituality and Practice

“As with the earlier Engineer Ari books, this one combines simple charm with a good-hearted message, all wrapped up in a bit of interesting history about the first steam engine to travel between Jaffa and Jerusalem in 1892.” —School Library Journal

“A camel, a train mishap and the holiday of Hanukkah bring together a Bedouin and a Jew in acts of kindness and camaraderie.

Eager to celebrate with friends in Jaffa, Ari balances an armload of sufganiyot (jelly doughnuts), dreidels, menorah, bottle of oil and the bag of Turkish coins as he rushes to the train he will drive to Jerusalem. On his way are several children playacting the story of the holiday, providing a tiny summary for readers, a device that is repeated throughout. Finally aboard and daydreaming a bit, Ari derails the caboose of his train when forced to make a sudden stop to avoid a camel sitting on the tracks. Rescue comes with the stubborn camel’s owner, a Bedouin named Kalil (‘friend’ in Arabic), who sends for help while Ari graciously accepts Kalil’s hospitality. ‘Your camel may be stubborn, but I was not careful.’ The observance of the first night of Hanukkah, coincidentally on the site of Modi’in, the ancient home of the Maccabees, is shared; Ari lights candles, sings blessings and teaches Kalil to play dreidel, and together they enjoy coffee with the sufganiyot. The late-19th-century atmosphere of the story is conveyed with gentle cartoons that move horizontally with the flow of a traveling train.

This addition to the series moves beyond the holiday with its implied message of friendship, cooperation and mutual respect for separate cultures sharing one homeland.” —Kirkus Reviews