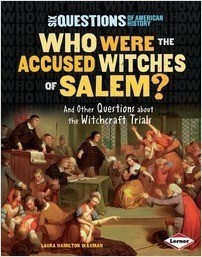 Who Were the Accused Witches of Salem?

And Other Questions about the Witchcraft Trials

In June 1692, a jury in Salem, Massachusetts, found Bridget Bishop guilty of performing witchcraft. The only evidence against her was villagers’ testimony. As punishment she was publicly hanged. Meanwhile, local girls had been behaving oddly for months. They cried out of being pinched or choked by a witch’s spirit. The girls accused neighbors, outcasts, and respected community members of tormenting them. As fear spread through Salem, jails filled with the accused. In the end, nineteen people were hanged for witchcraft in one of the darkest moments in U.S. history.

But what led to this terrifying event?
Who was likely to be accused?
Why did the witchcraft fever finally come to an end?

Discover the facts about the Salem Witchcraft Trials and the mark they left on the U.S. justice system.