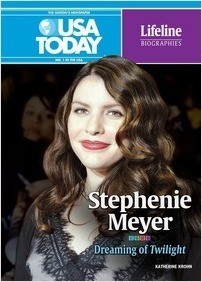 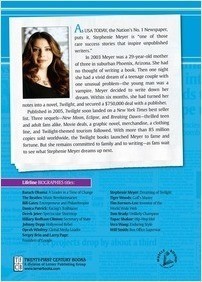 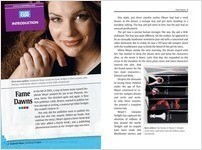 As USA TODAY, The Nation’s No. 1 Newspaper, puts it, Stephenie Meyer is “one of those rare success stories that inspire unpublished writers.” In 2003, Meyer was a 29-year-old mother of three in suburban Phoenix, Arizona. She had no thought of writing a book. Then one night she had a vivid dream of a teenage couple with one unusual problem―the young man was a vampire. Meyer decided to write down her dream. Within six months, she had turned her notes into anovel, Twilight, and secured a $750,000 deal with a publisher. Published in 2005, Twilight soon landed on a New York Times best seller list. Three sequels―New Moon, Eclipse, and Breaking Dawn―thrilled teen and adult fans alike. Movie deals, merchandise, a clothing line, and Twilight-themed tourism followed. With more than 85 million copies sold worldwide, the Twilight books launched Meyer to fame and fortune. But she remains committed to family and to writing―as fans wait to see what Stephenie Meyer dreams up next.