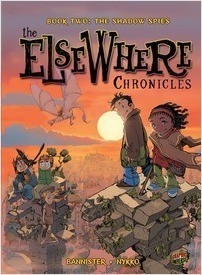 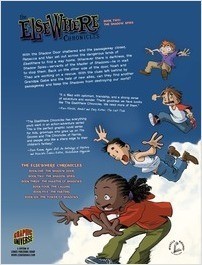 From the Series The ElseWhere Chronicles

With the Shadow Door shattered and the passageway closed, Rebecca and Max set out across the dangerous lands of ElseWhere to find a way home. Wherever there is darkness, the Shadow Spies – servants of the Master of Shadows – lie in wait to stop them. Back on the other side of the door, Noah and Theo are working on a rescue. With the clues left behind by Grandpa Gabe and the help of new allies, can they find another passageway and keep the Shadows from destroying our world?

“Originally published in French under the title Les Enfants d’ailleurs, the Elsewhere Chronicles brings the charm and nuance of European comics to a new generation of readers who are sure to be captivated by the colorful art, smart dialogue, interesting story, and genuinely likable characters.”
—Library Media Connection

“The action sequences are clear and suspenseful, providing an interesting contrast to the charming figure work. . . the books effectively grab readers and create a compelling emotional landscape to complement the alien one.”
—School Library Journal

“Fantasy, play, and reality are well mixed in these short books. The reader tries to escape the next attack from the Shadow Spies right along with the foursome as each page unfolds another heart-stopping discovery. The pictures are rich, with well-defined colors and expressions that accurately reflect the character’s state of mind. A brief summary of the previous book is captured at the beginning of books two and three, and a hint of the next episode is given, including the third book, which finishes with ‘The End?’ Developmentally appropriate, the camaraderie between the characters emulates real life boredom, inquisitiveness, adventure seeking, and imaginations sometimes out of control. The ElseWhere Chronicles are a solid exploration for younger teens for whom things may still go bump in the night.”
—VOYA

Bannister was born in 1973 and has been creating graphic novels since the age of 17. He is the illustrator of the popular Tib & Tumtum series andThe ElseWhere Chronicles series. His work has also appeared in Flight Explorer (Villard Books/Random House) and several editions of the Flight anthology.