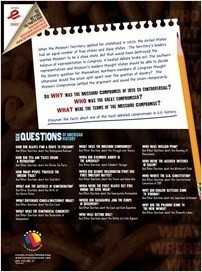 What Was the Missouri Compromise?

And Other Questions about the Struggle over Slavery

When the Missouri Territory applied for statehood in 1818, the United States had an equal number of free states and slave states. The territory’s leaders wanted Missouri to be a slave state. But that would have destroyed the balance of representation in Congress. A heated debate broke out. The southern representatives and Missouri’s leaders thought states should be able to decide the slavery question for themselves. Northern members of Congress thought otherwise. Would the Union split apart over the question of slavery? The Missouri Compromise settled the argument and saved the Union—temporarily.

Discover the facts about one of the most debated compromises in U.S. history.

Wendy Lanier is an author, teacher, and speaker who lives in Beaumont, Texas. She has written books for Lerner Books, Capstone Press, Lucent Books, and KidHaven Press. She also regularly contributes work to various magazines and websites. Wendy has a B.S. in Speech Communication Disorders and a M.Ed. in Elementary Education. She has taught grades 3, 4, 6, and 7 specializing in the areas of science, social studies, and language arts. She began writing full time in 2008 after teaching for nearly twenty years.